There is a favorite beach in Limbe, far from downtown that features cold drinks, an armed guard (it is the Gulf of Guinea after all) and a beautiful black sand beach. Most of the time, the crowd consists of a few scattered ex-patriots and other volunteers. As you walk into the lukewarm equatorial water, you can turn around and stare at apparently untamed mountains that meet you right at the coast. It is a very undeveloped coastline and one of the most beautiful places I’ve ever been.

A few months ago, I was with my three girlfriends at the beach and we were feasting on an enormous pile of mangoes and taking pictures, trying to look skinny—just being silly and relaxing together. As the morning bled into afternoon, there were maybe a dozen very obviously American families at the beach. We started talking with a very tan and friendly couple; they were the kind of couple that has been married for decades, plural, and still hold hands. They told us the families were missionaries from all over Africa vacationing Limbe for a conference. We each shared thoughts on ex-pat life and compared living conditions in Cameroon and Ethiopia. As we parted ways, the wife looked at us and said with sincerity, “Thank you for serving.” That was the first time anyone had told me thank you for giving up two years to come here. 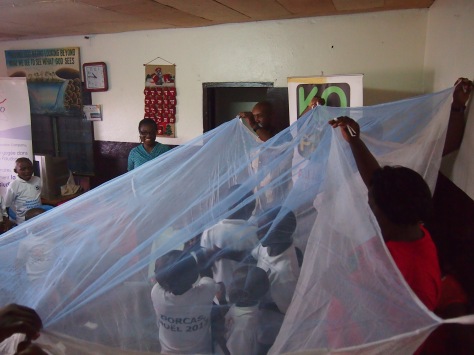 In June, I spent a day working with Knock Out Malaria to deliver mosquito nets to two orphanages in a small town in the Southwest. We arrived at the second orphanage where I led an impromptu session on the Hokey Pokey Dance followed by a more formal session on malaria prevention from Sonia. As I sat there daydreaming and watching the children, my friend Erica whispered to me “Do you think we should get some cookies?”. Without pause, I answered “No thanks, I’m not hungry.” Erica looked at me over her glasses with a simultaneous scowl and smile, looking at me in a way that only she can to communicate that I just said something pretty ridiculous. “They aren’t cookies for you! Get out of your head and stop thinking about yourself”. For the record, there is no good way to react to a faux pas like that. I can only be thankful she is one of my best friends here and so she is likely not to write me off as a jackass.

I feel like a fraud for being thanked for serving because, most days, living in my transient little village feels like regular life to me. I have the ability to put my foot in my mouth in two languages now. The whole of me is neither of those scenarios. That is me, a public servant, climbing on top of a bus trying my hardest to cuss out the driver while freeing mine and other’s luggage to the horror of the agence. I am also a public servant as I go into a prison once a week and work with the men to learn entrepreneurship and leadership skills. They are two polar representations of daily life for a public servant that is positively flawed.