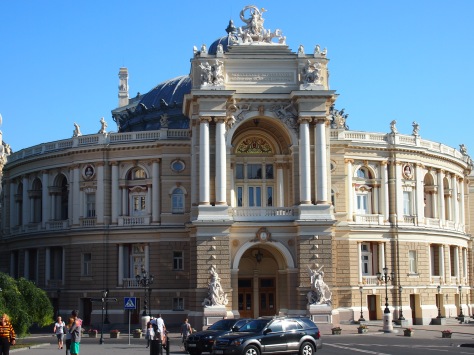 My trip to Odessa was a rambling adventure. We took a night bus which was nearly impossible to sleep on due to the heat and crowds. Arriving in Odessa around 4am, we took a cab to the shoreline and spread out our towels on the beach and tried to grab an hour or so of sleep.

In the daylight hours, we found a place to eat some breakfast. At the next table was a Frenchman who worked at the world famous Ritz Carlton in Paris. Since the hotel was closed for renovations (I can thank Vogue for knowing this) he was in Odessa to learn Russian for a few months to increase his tips among Russian customers. After breakfast, we walked around looking at some of the statues, the one pictured at left shows that the gold parts of the engraving are rubbed clean. The superstition is that if you touch it, you will have money in your life. The image that comes to mind for me is the similarity to the Alice in Wonderland statue in New York City’s Central Park, with her finger rubbed clean.

Odessa is a gorgeous city on the Black Sea. With that, comes the “let your hair down and kick your feet up” attitude of a seaside town. Odessa locals are known for being happy and having an unusual sense of humor. In the photo below, two teenagers were practicing swing dancing as we walked by. Sometimes, being surrounded by joyous people can be contagious. The city has about one million residents, but there is no subway! The public transit options are these tiny, crowded buses. To get down to the beach, we took this contraption that looks kind of like a ski lift, it provided a great view of the city and the shoreline. The city itself is absolutely beautiful. It has a festive nature with an array of restaurants tucked into courtyards. Mostly, I feel that Odessa has something for both beach goers and city folks. Most of the restaurants had ample outdoors seating. Being able to walk through the streets and preview live versions of the food choices made picking only one place to eat difficult. Though part of me wonders if Odessa was so great to me because the busier streets looked more American,  I hope it’s not the familiarity that is so appealing. 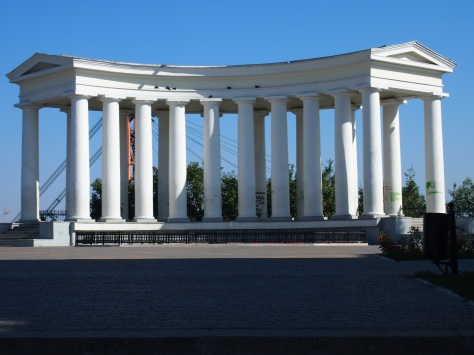