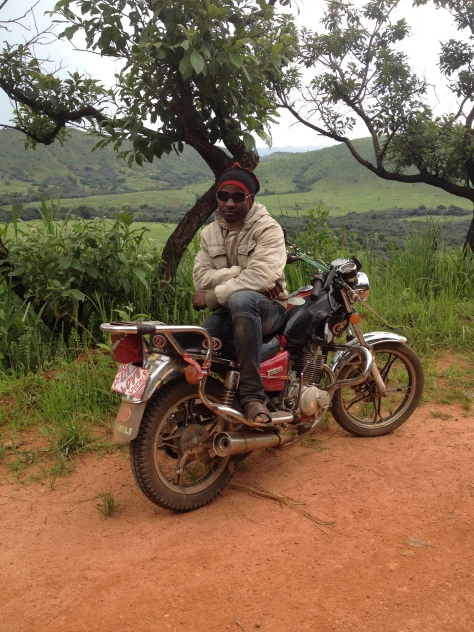 What are the challenges of driving okata?
“The stigma is most challenging. The public has a notion that this is the lowest type of job and is meant for the lowest type of people, frustrated people, illiterate people. Young girls insult me because they say driving bike is for dirty people. I have changed some peoples minds about this, starting with my family; they thought that when I started driving my education was over, but I challenged them by registering myself for the O-level tests this year with the money I made from driving bike. I take pride in the appearance of my bike and in my own appearance; I show girls that riding okata is not for dirty people and is something to be proud of.”

“Tell me about your wife.”

“Our being together was natural. Why? Because she is very tall and I am a short man so we balance eachother. We’ve been married for 15 years now.”

**Alfred is a special Moto Man because he is also the leader of a union of 300 moto men in the region. He told me that men who formally sign up to be part of the union get some very needed services in the area. If a man goes to the hospital, then the union pays the hospital fees. If a man is stuck somewhere, the other members have a responsibility to stop and help them. In the event of death, the union gives the family money to help the grieving family. 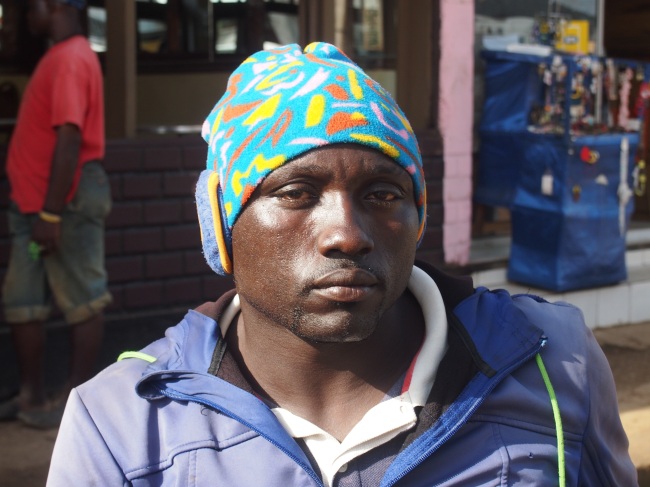 No comment. He was fine having his photo taken, but didn’t to talk. 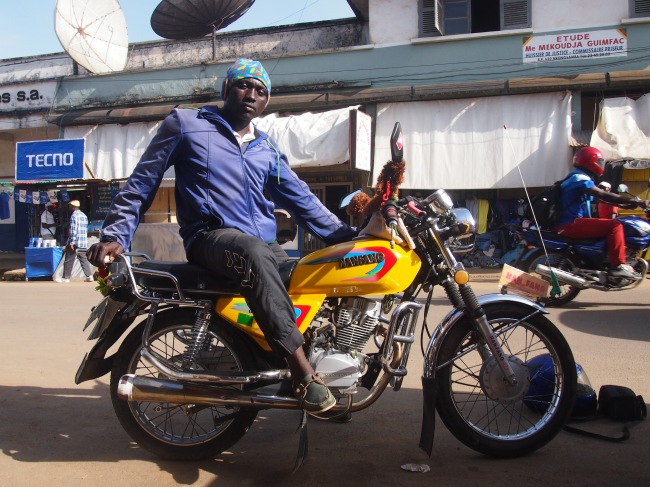 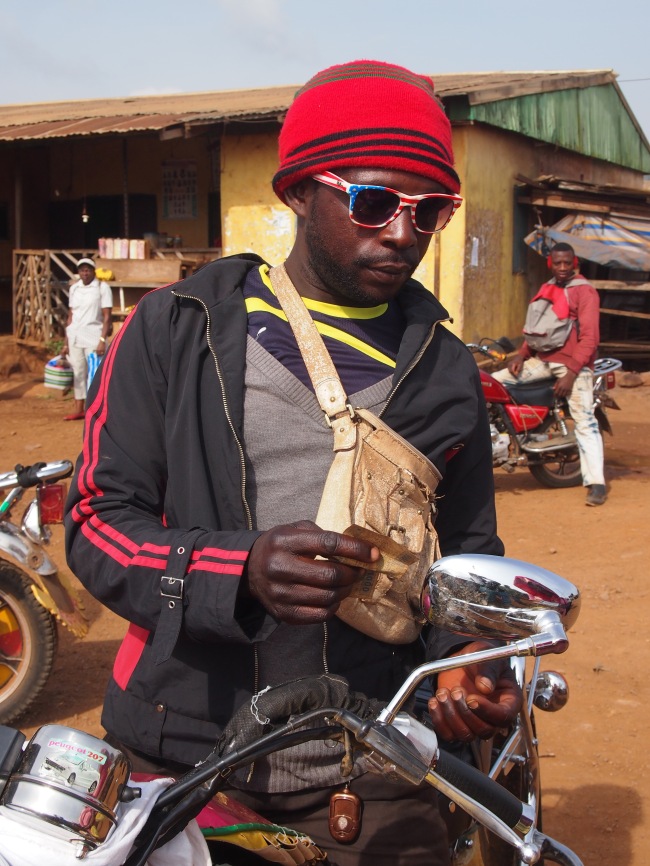 “Do you want to see your photo?” 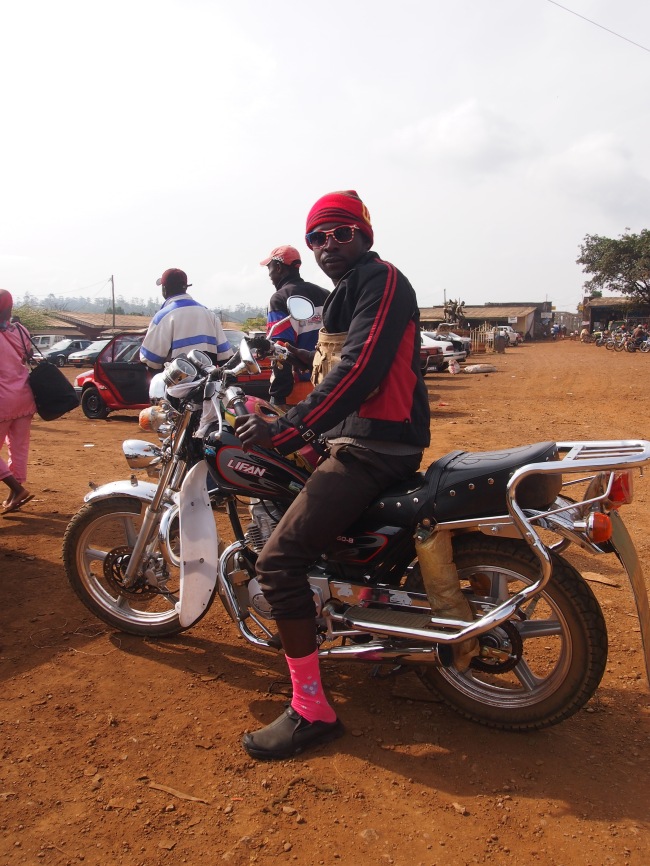 “I paid for my bike by farming cassava. Being a moto man is better because there is small money in it.” 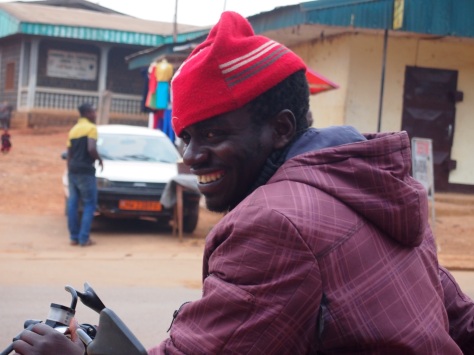 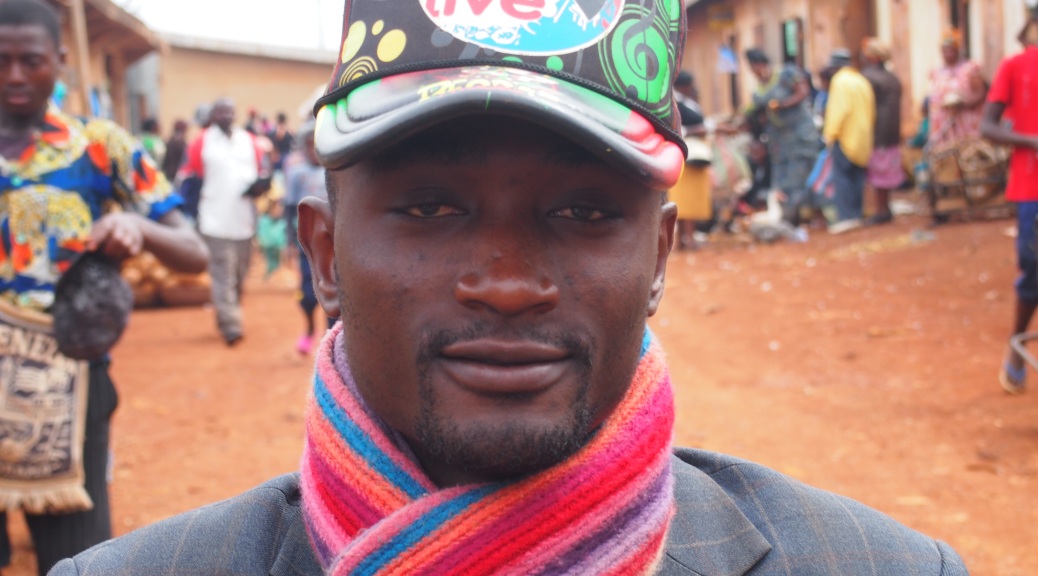 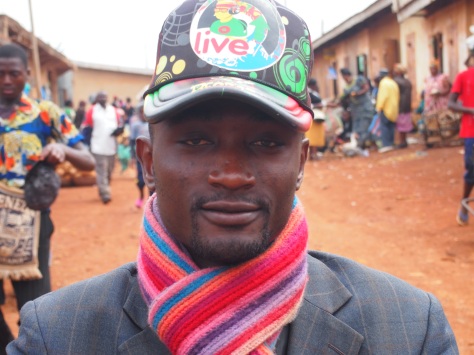 “The best part of Cameroonian culture is that we work hard”.

Is Kiev what comes to mind when you think of an incubator for artists? Probably not, but that might slowly change. The Kiev Biennial was the first of it’s kind for the capitol and largest city in Ukraine. The massive Biennial had almost 100 exhibitors. An article in The Independent explains that the exhibits featured 22 artists from Ukraine, giving the Biennial a bit of a nationalist flavor.The international variety also gave voice to artists who are not from the traditionally saturated Western European art circuit.  The Biennial brought 13 artists from China into the spotlight; the political nature of an exhibit might hit close to home for Ukrainians who share a common history with Communism.

The Mystetskyi Arsenal welcomed David Elliott as the curator for the Kiev Biennial, an art world superstar. Blouin Art Info mentions that some of his credentials include director/founder of the Mori Art Museum and curator of the Sydney Biennial in 2010. Elliott was attracted to Kiev, in part, due to the building it was being hosted in, which is an old weapon and military center. The Biennial really had a distinct flavor,

One of the local artists to be featured is Boris Mikhailov, who might be most well known for his social documentary photography. He is famous for his “Red Series”, which are both political and graphic in content. But that is the point of a Biennial, to stimulate discussions of politics and culture at present. His lense is not focusing on people at the Biennial, instead it depicts the urban decay and industrial grit of Ukraine. Mikhailov is truly something to brag about, as he is home grown with the silver lining of international fame.

An artist to be featured who has been a recent part of the news is Ai Weiwei. Weiwei is quite a force to be reckoned with–from China, who as of late, has been making his name criticizing the Chinese political regime. Weiwei is an internationally acclaimed artist who spent more than 10 years in New York City, studying at Parson’s. He has been instrumental in establishing the Beijing East Village and setting up a Chinese artists network. Weiwei has used blogging as one of his platforms to express his distaste for Chinese Human Rights policy and government procedure. The guts it takes to use one’s power to criticize a powerhouse like China for the betterment of a billion people is makes his art so powerful.

Ukraine has an image problem among the European Nations (among other more tanglible issues). It is always striving for admission into the European Union, but faces serious setbacks almost every time there is new press. Most people hear about government corruption more than advancements for the common good. This summer certainly seems to be dedicated to showing the world it’s cultural contributions. Florence Waters wrote in The Telegraph “The nationalistic incentive behind this event is no secret. Twenty-two of the 99 artists who are being represented in the main exhibition are Ukrainian born. Many of Ukraine’s successful artists – like their writers, among them ‘The Master and Marguerita’ author Mikhail Bulgakov who was born in Kiev – are perceived by the world at large as being Russian. By presenting these artists alongside international giants like American Paul McCarthy and Japanese Yayoi Kusama, the Ukraine can hope to re-claim their lost identity.” I would recommend readers to venture over to Waters’ full length article, it was one of my favorite perspectives of the Biennial. Some pictures from the exhibit are featured in my earlier post, Part 1. Cheers!

If Ukrainians tired of the Euro Cup 2012 festivities this summer, there was another option– ARSENALE 2012: The Kiev Biennial of Contemporary Art. A complex name for a complex exhibit. The number of photo’s  taken during my visit would be extreme to try to fit into one post. So instead, the exhibition will be spread over between Tuesday and Friday. I will work from the outside to the inside of Mystetskyi Arsenale; first, discussing the building itself and second (on Friday), discussion of the artists themselves. The patio of arsenale had the feel of a swanky invite only part, with live music and expensive drinks. At the same time, I also felt right at home because the exhibits had signs in English so I could actually read a bit.

The Kiev Biennial of Contemporary Art was thought provoking, well curated and highly anticipated in the international art world. It was also well timed, coinciding with the summer tourist rush and the added bonus of the Euro Cup football fans. One of the very best parts of this exhibit was the variety of people who attended this exhibit. The people came dressed in every variety; I got to see Ukrainian hipster students, socialites of every age, and those from the international scene.

All of the greatest museums demand a great gallery space. The Mystetskyi Arsenal or Art Arsenal is no exception. When restorations are finished, Arsenale will provide more than 50,000 square meters of gallery space. Construction of the space began in 1783, with the building mostly being used for military and defense purposes.After the fall of the Soviet Union, the building lost its usefulness.  Many locals don’t really consider it one of the more beautiful buildings in Kiev, having passed it for years on the way to somewhere else. Almost everyone agrees that it is a fabulous space for art exhibitions. What remains true today of Arsenale, is that the cavernous space is a meaningful gallery space and hosting large crowds.  I must be honest; the size of the exhibit–there is nearly 250 installments–is something I would have to set aside a whole week to fully absorb. Instead, I made it part of the way through. The slide show is a peek at some of the exhibits:

Stop by on Friday to read about the artists that will were part of the biennial and see more photo’s of the exhibit.

I would also like to mention that the photoblog Toemail featured one of my posts about Landscape Alley. Their website is devoted to photos with (you guessed it!) toes! Stop by their site to see some other places toes have recently visited.