I was always curious about Besarabsky Rynok, but happening across a New York Times article  “36 hours in Kiev, Ukraine” by Finn Olaf Jones, solidified the food market on my destination list.  The trip to any city market is exciting to me, but what makes Besarabsky Rynok unique is the variety of goods offered. For instance, anything that can be consumed in pickled form can probably be found here. This is less of an international food market, and more of a national tribute to Ukrainian cuisine. In addition to fresh cut meats, you can find Ukrainian sweets and dried fruits here. It is considered by locals to have the best quality produce, but also the highest prices. I am keen on believing this because when I entered on a Saturday evening, I was one of a small number of people there–maybe due to the prohibitive prices. There is a particular group of people who tend to shop here–Ministers of Parliament, it is somewhat close to their offices and they have no shortage of money.  And contrary to almost any other market in Ukraine, you shouldn’t dream of negotiating with the vendors at Besarabsky Rynok. 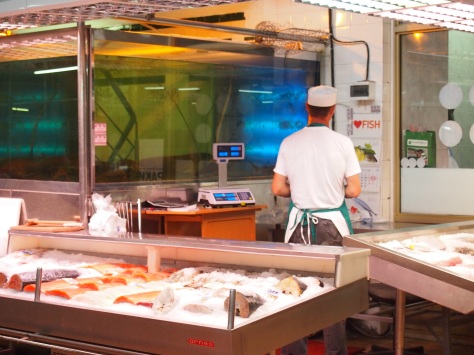 My time in the market was cut short by a security guard telling me that I cannot take pictures. For a moment I tried to communicate in English and then gave up, disappointed, but my most enduring feeling was irritation. At a certain point, my most immature side surfaced and I sneaked a few more photos before stealthily leaving.

The other main way to get your produce in Ukraine is through a generic grocery store or through women who sell their goods on the roadside stands. I would deduct that most people use a combination to feed their family.

Above is an example of the enormous amount of pickled items available here. Would you try one of the pickled items available? I suspect that Ukrainians are so fond of pickling and preserving due to the harsh winters, at least compared to a mild Atlanta winter. I was reminded that this is one of the few places where the vendors would actually shout at me in English, which is relatively rare in Ukraine. How they knew I was English speaking, I will never know.