Today, the vast majority of the country is Eastern Orthodox. A big difference (compared to traditional American holidays) is the calendar. For the Eastern Orthodox religion, Christmas falls on January 7. Once you move past the language barrier, the services feel very similar to a traditional Catholic mass.

The pictures posted are memories of how religion interacts with Ukrainian public. The first picture, is in a public park, where the presidential palace is housed. Finding something that is so lovingly taken care of and tended to by the public is a gentle reminder of the role religion has in most citizens lives. The second photo is one that I had to sneak to take, but it really shows the humanity of the priests, how they are real, approachable people.

One morning as I woke up (on the ninth floor of a building), I heard a choir singing because it was a holiday. They carried on for hours; I was told this is not unique to our building and I could only imagine choirs all over the country swirling through the air as the whole city woke up. It’s definitely one of my favorite memories of morning. You can always know a holiday is on the way because the women who sell things on the street add specialty items to their regular rotations. 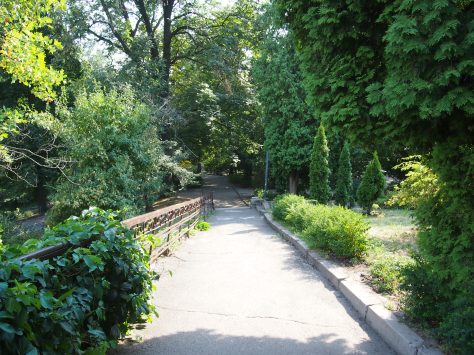 When you look at this picture would you know that you are in downtown Kiev? Some of the city parks have trees that are so mature it’s like you are instantly shielded from the city. Do the photos show a park that looks a little shabby and overgrown? The city seems to not care for upkeep of the park in the some of the more expected ways (Weeds! Overgrown Shrubs! Entire patches of grass missing!) but once you get over this, the park is a great place to steal 10 minutes to yourself. This park, pictured above, is part of the city botanical gardens, but I was never able to get inside because (As I was told) you must have the right credentials. A botanist I am not. This park is so busy most days that you must look to find a bench that is not being used. 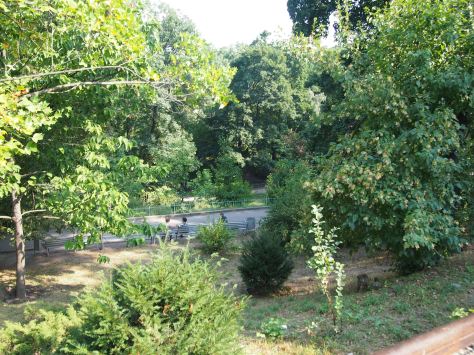 I used to spend a fair amount of time on these benches reading or eaves dropping on tourists. The number of pigeons in the city can be alarming but if you don’t sit next to one of the people feeding them, you can at least pretend not to hear the sounds of the city here. Reality will set in when you realize an exit to a major metro stop is just up the stairs. There is also a great shops just up the block that sells macaroons.

Yes, that water in the “pond” is more like a science experiment or algae smoothie. One of the acute differences between America and Ukraine is that the grass does not look like it was off a golf course–and sometimes it’s not there at all. Having a picnic on these grounds might be better enjoyed with a yoga mat between you and your tush.